6 reasons to visit YPRES (Ieper) on the 11th of November. 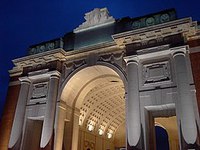 Historically, the Menin Gate of Ypres was simply a crossing point over the moat and through the ramparts of the old town fortifications, on the road to the nearby town of Menin. It had a special significance for the troops though: it was from this spot that thousands of soldiers set off for the part of the Front called the Ypres Salient - many destined never to return.

This became the chosen site for one of the grandest and most haunting memorials of the Great War. The stone walls of the Menin Gate are engraved with the names of nearly 55,000 British and Commonwealth soldiers lost on the field of battle but with no known graves; a son, a father, a brother. In fact the walls of the Menin Gate were not big enough: a further 34,957 names of the last and untraced are inscribed on the walls of Tyne Cot Cemetery to the east of Ypres.

On the 11th of November at 8 p.m., they play a special edition of the last post. You can go listen and look but only with an invitation you will be able to enter the Menin gate. Alternatively you can follow the ceremony from the Market Square as the ceremony will be broadcasted on a large screen. 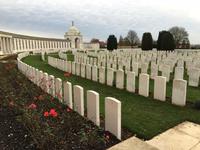 There are more than 150 Commonwealth cemeteries in the Ypres Salient. All worth a visit but Tyne Cot Cemetery is the largest Commonwealth cemetery is the world. It is now the resting place of more than 11.900 servicemen of the British Empire from the First World War. This area on the Western Front was the scene of the Third Battle of Ypres. Also known as the Battle of Passchendaele, it was one of the major battles of the First World War.

Although there are different sites where you can walk into the trenches, the Yorkshire trench and Dug-Out are the most recommended.

The Yorkshire Trench & Dug-out was, in close consultation with the archaeological team, restored along its original route, including the entrance and exit of the 'deep dug-out' from 1917. A series of information panels and a ground plan of the dug-out on the site give the visitor graphic representation of trench.
Permanently open (sunrise to sunset) - Industrial Estate along the Ieper-Ijzer Canal

The Ypres region was the backdrop to one of the bloodiest battles in history, over 100 years ago. Now the last witness has died too, the In Flanders Fields Museum is more than ever the gateway to the First World War in Flanders. The exhibition with touching video projects, unique sound fragments and the most up-to-date multimedia applications immerse you in the life at the front. Each visitor also receives a poppy bracelet that enables him/her to discover four personal stories of 'Joe Public' in the Great War. By logging in you can meet your peers in the war, a century ago.

Not only on the 11th of November, but throughout the whole year, Ypres is worth a visit. Ypres is a city with an especially rich and diverse past. Ypres was also a flourishing place of commerce during the Middle Ages, when the city was one of the leading cloth centres in Flanders, along with Bruges and Ghent. The impressive Cloth Hall is evidence of these years of glory. St. Martin's Cathedral and the superb fortresses also date back to this period. Definitely worth the visit! For more information about the Flemish culture and Language lessons feel free to contact Learn Dutch Online